“The Extended Sessions” EP is the follow-up release to the extremely successful “The Four Seasons” album release by VIVALDI METAL PROJECT which hit the shelves in Summer 2016 on CD & double vinyl on Pride & Joy Music. The album up to today is one of the label’s best sellers and now being continued with this valuable EP which will shorten the waiting time for the fans until the next full album! 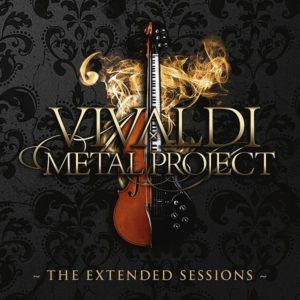 Created and produced by Mistheria, VIVALDI METAL PROJECT are currently working on bringing the project onto stage with full band, orchestra and choir. During Summer/Autumn 2017, the band played a series of unplugged shows in Finland, in Bulgaria and in Italy in advance which resulted in the idea to put some of the extraordinary material onto this EP!

“The Extended Sessions” includes four tracks which are centered around the group’s performance at “Kitee International Music And Art Festival” which took place in Kitee (Finland) on July 13th, 2017. Arranged by Mistheria, the performance at the “Sleeping Sun” event featured Mistheria himself on piano and Tsena Stefanova on vocals. An epic video for this track will also be available soon online.