THAT ROCK GUY is arguably one of the hardest working artists in the world, performing over 1000+ live shows in the last three years alone. Performing energized melodic rock, the Australian singer, songwriter, multi-instrumentalist and producer has released his debut album “Nothin’ To lose” to the world, bringing his own brand of powerful no-frills melodic rock to the masses. “He’s simply a brilliant performer, a guitar guru … the night he played ‘The Village’ was just incredible. I’ll never forget it” – Jon Proom, AusPro Radio, 2015.

Currently on the final leg of an unprecedented three-year worldwide tour, That Rock Guy has previously toured with The Alan Barnes Band who notably opened for rock superstars Bon Jovi on their “Sleep When I’m Dead” tour. After joining them on the Sydney leg of their concert tour and receiving a plethora of positive reviews, he was enlisted to performed the lead guitar duties on XL’s self-titled debut album, mixed and produced in Melbourne by gold record award winner Andy Shanahan from Australian AOR classic rockers, Roxus.

Around 2001, he based himself in Europe, setting up a studio in Germany before heading out as a hired gun guitarist with international touring band BTB and performing multiple tour contracts across Europe, Asia and the Middle East. As a prolific song writer, there was an ever-growing demand from fans at the live concerts for That Rock Guy to record an album to satisfy the yearnings of his loyal and growing fan base. 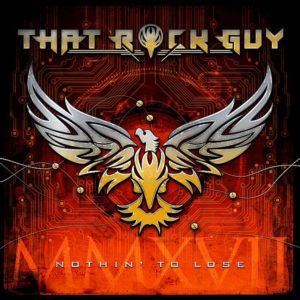 On the strength of the demo recording and music video of the fan favorite live song “Through The Night“, That Rock Guy was offered a record deal with AOR Heaven and began recording the debut album during a tour of the Middle East. A truly international affair, he returned to Starship Studios in Germany to continue tracking the album in between tours with some additional guitar work at Split Second Sound in Amsterdam, and the final tracks were recorded at Studio 1206 in Japan.

With the album fully recorded, the songs headed back to the world renowned Wisseloord Studios in Europe to be mixed by famed Swedish engineer Erik Wiss of WMP. The final touches were completed when the album was mastered by multiple Grammy, gold and platinum award winning mixing and mastering engineer Thomas “Plec” Johansson at the Panic Room in Sweden.

As the final leg of the world tour rolls on, stay tuned for upcoming music video releases and the debut album from That Rock Guy, “Nothin’ To Lose“, is available on the AOR Heaven record label worldwide.