When the German NDH/Gothic/Metal band LICHTGESTALT from the Rhine Ruhr/ Münsterland area was founded at the end of the year 2013, it became rapidly clear that this group will start through in their scene immediately. Only a few months and steady rehearsals later, the self-titled debut EP “Lichtgestalt” was released in 2014 on the band’s own label Lichtgestalt Music. The EP marked a big success and charted straight away in the Top 30 of the German DJ Club Charts.

Their first full-length album “Motorenherz” saw the light of day in April 2015 on the Danse Macabre label. The specialized press celebrated the record as, for instance, powermetal.de wrote that “the track ‘Tiefenrausch’ impressively demonstrates that only this band is able to the claim the rights on the crown of German, hard music…”, whilst Orkus magazine even attested that the quartet had created a new musical genre: “Theatrical, spaced out, different… Lichtgestalt with their debut album firsthand creates a new genre – “Neuen Harten Stream” (new, hard Steam)…“

Since May 2015, the band around the charismatic singer Thomas C. Hertz regularly shows live that they’re also capable to transfer their energy from the studio onto stage. In the year 2015, Lichtgestalt also successfully toured twice with the German NDH iconic band STAHLMANN and started to play first headline shows. 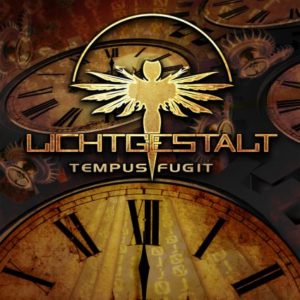 In line with their live activities, guitarist and song-writer, Der Heizzer, and singer and lyricist, Thomas C. Hertz, began the song-writing of their sophomore album “Tempus Fugit” which will be released on May 26th, 2017 on the Pride & Joy Music label with Edel distribution in their native country of Germany.

In the meantime, the group, which furthermore still consists of Lippman on bass guitar and Brukke on drums, finished more live shows during the year 2016 which included a performance at prestigious Gothic Castle Festival and some club shows. In February 2017, Lichtgestalt hit the road together for a 14-day European tour together with the metal bands ALMANAC & GLORYFUL and continue to play club shows and more festivals during the year to support the “Tempus Fugit” release. The year 2017 will without any doubt the year of Lichtgestalt!