The Chicago-based Paul Dietrich Quintet was formed in 2012 as a vehicle for its leader’s small group writing and maintains an active performance schedule in Chicago and throughout the Midwest. Paul Dietrich, embarks on second album with 10 new boundary-expanding compositions. With the release of his band’s second album, “Focus“, trumpeter and composer, Paul Dietrich, further hones his distinctive style. This genre-blurring album features Dietrich’s characteristic lush harmonies and subtle melodies, gliding over a fresh, rhythmically adventurous framework. For Dietrich, the essence of “Focus” exists in a liminal space between introspective simplicity and organized chaos.

This duality can be partially explained by looking at Dietrich’s early musical influences. The product of a musical family, Paul grew up in a household where hearing different kinds of music was an integral part of daily life. “I grew up hearing a lot of jazz and classical music from my parents, while my older brother listened mainly to progressive rock and metal.” Upon Paul’s immersion in the jazz world, he found himself drawn to music that incorporated aspects from a wide array of styles. “A lot of the music I love walks the line between jazz, classical music, and prog rock, music that kind of challenges the boundaries of what we’re used to classifying as genre.”

Indeed, much of this album conjures up imagery, no surprise coming from Dietrich, an avid movie buff. “I’ve seen the power that a soundtrack can have over a movie. A good soundtrack can completely set the tone of a film, and it can really have total control over how a viewer will interpret it.” This album tries to capture that power, but leaves the interpreting up to listener. The song titles are intentionally vague. “I want the listener to feel something, but I don’t want to dictate what that something might be. I know what these songs mean to me, but I want them to mean something else to the listener.”

“Focus” features incredible performances by the members of the Chicago-based quintet, a group that has been performing with the same lineup since 2012. The ensemble emanates a cohesiveness that can only exist after that much time together, sounding totally comfortable within the sometimes complex idiom of Dietrich’s compositions. The group features two natives of Kenosha, Wisconsin, bassist Tim Ipsen and saxophonist Dustin Laurenzi, and pianist Paul Bedal is the only member of the group originally from Chicagoland. Dietrich goes back furthest with drummer Andrew Green, originally from Washington D.C. The two were classmates starting in 2006 at Lawrence University in Appleton, Wisconsin.

What results is incredibly fresh and exhilarating set of compositions that when absorbed individually or on a whole captivate and invigorate the listener while simultaneously offering something comfortable.

PAUL DIETRICH is a Midwest-based trumpet player, composer and educator striving to make music that synthesizes the sounds of classic and modern jazz, Western classical music, folk, progressive rock and other diverse genres. Paul holds a Bachelor’s degree in trumpet and jazz studies from Lawrence University (2010) and a Master’s degree in Jazz Studies from DePaul University (2012). While at DePaul, Dietrich wrote several pieces that were performed by the DePaul University Jazz Ensemble, including an arrangement of Phil Woods‘ “Pairing Off,” which was recorded on the Jazzed Media release “Right to Swing” (2013) and featured Woods and the composer. Paul is currently a resident of Madison, Wisconsin, where he is an active member of the music scene. In addition to his own groups, he plays with the Darren Sterud Orchestra, the Madison Jazz Orchestra, the Neophonic Jazz Orchestra, the Ben Ferris Octet, and the Ben Ferris Quintet, whose 2016 album, “Home“, featured two of Paul’s compositions. Paul is also active as an educator. In addition to a private studio, Paul is also the coordinator of the jazz program at Prairie Music & Arts, and directs the Madison East High School Jazz Orchestra.

Chicago saxophonist, DUSTIN LAURENZI, has developed a distinctly personal approach to improvisation and composition that has garnered the attention of the city’s creative music community. Recognized for his “offbeat approach to articulating harmonies and constructing melodies” (NextBop), Dustin’s music is inspired and informed by jazz, folk, improvised music, and contemporary classical music. His wide range of influences and inventive improvisational sensibilities have made him a sought-after musician in many circles of Chicago’s rich music scene. Dustin has been a
leader/co-leader of his own projects, Twin Talk, Snaarj, and Natural Language, and a member of the Marquis Hill Blacktet, the Quentin Coaxum Quintet, and Katie Ernst’s Little Words, among others. He has released several albums featuring his original compositions, including Twin Talk’s eponymous release, praised by Chicago Jazz Magazine as “a cohesive and original album that brims with a vibrant fluidity and a poetic sense.” In addition to performing and recording with Chicago jazz-centric projects, Dustin has spent the much of the last year on the road with Grammy award-winning artist Bon Iver and appears on the band’s 2016 release 22, A Million. Dustin earned a Bachelor of Music in Jazz Studies and a Performer’s Certificate from Indiana University’s Jacobs School of Music in 2011. He has performed or recorded with Jeff Parker, Matt Ulery, Russ Johnson, Jeff Hirshfield, Corey Christiansen, Lil BUB’s Big Show, the Dave Lisik Jazz Orchestra featuring Tim Hagans, and has recently been featured at the Chicago Jazz Festival, the Hyde Park Jazz Festival, and the Kennedy Center. Dustin’s debut album as a leader, Natural Language, will be released in September 2016 on ears&eyes Records.

PAUL BEDAL is a pianist and composer based in Chicago, Il. He has composed music in a variety of genres and mediums ranging from orchestral to electronic music. Paul is both a Ears and Eyes and Cam Jazz recording artist recently releasing his debut album as a leader “Chatter” which received positive marks from both the NYC Jazz Record magazine and Wondering Sound catalogue. Paul stays busy performing in the Chicago area and composing for film and various freelance projects.

KATIE ERNST has been described by the Chicago Tribune as “a versatile young bassist who plays in far-flung bands and sings with uncommon delicacy and authenticity.” Her recent compositions are inspired by the poetry of American writer Dorothy Parker. Her complete Dorothy Parker project, Little Words, was released in 2015, and is currently available on BandCamp. As both a bassist and vocalist, Katie has performed at the Chicago Jazz Festival, the Kennedy Center for the Performing Arts, the Hyde Park Jazz Festival, and Xerox Rochester International Jazz Festival, among others. The Chicago Reader identified her as “one of the brightest lights on Chicago’s jazz scene, and she isn’t close to hitting her creative ceiling.“

Bassist, TIM IPSEN, grew up in Kenosha, WI. He received a Bachelor of Arts degree in Instrumental Performance/Jazz Studies from Columbia College of Chicago. He has collaborated on performances with such artists and groups as Von Freeman, Chicago Jazz Ensemble, Cedar Walton, Terrence Blanchard, Chicago Human Rhythm Project, and Billy Childs. He performs with the Paul Dietrich Quintet and the Jamie Breiwick Spirits Quartet. 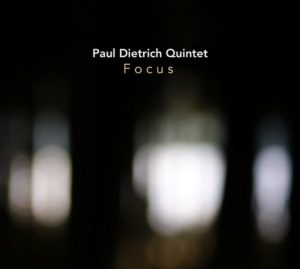 Mr. Matthew Golombisky, owner of the Chicago based ears&eyes Records, after considering my review – Matija Dedic – “Dedicated” (ears&eyes Records, 2017) – proposed to me to review this issue – Paul Dietrich Quintet – “Focus“. After detailed listening of this music, I am thankful he gave me that chance. This album comes out in May 2017 – so it’s given me the honor even greater. Thank you Mr. Golombisky.

Instrument that dominate in this music of Paul Dietrich Quintet is trumpet played by Paul Dietrich, personally. The trumpet as lead instrument in jazz music, I did not have a chance to listen often. Therefore, the music of this quintet was some kind of refreshing sound for me in comparison to the jazz music that I listened to recently.

While listening to this music, can not dispel the impression of one thought – although arranging everything is in its place – I have the impression that with the quintet will now play the entire jazz orchestra. That width foreshadows to me the structure of played compositions. I think it is no accident. This fact shows that Paul Dietrich has great ability and I believe that one day his quintet will be replaced with jazz orchestra.

What I especially wanted to point out, in relation to the music of this album, is expressive emotionality and dynamics, musical elements that tell their own stories. Crescendos and decrescendos, with a changing main role of solo instruments, brings thrill indispensable to a jazz piece to be heard with full attention. This album has these elements.

Mr. Paul Dietriech can be happy that he had a brother who has been “infected” him with progressive rock and metal music. Musical structure should be subject to various influences, of course, to some extent, what will bring much-needed versatility and stylistic richness.

With this album, such as it is, Paul Dietrich Quintet has a chance to expand the reach of their listenership, recognition. If they win the USA, they have won the whole world. That chance this album gives to them.