How did The Mole Pack happen? Is there some meaning in the name of the band that connects you?

It was somehow the result of our longtime companionship and sharing some mutual ideals, directions and musical tastes. Correct, this name has a meaning that connects us all, and all those sociological thoughts about certain things and approach to them. Namely, there’s analogy with the name, where mole is an very short sighted animal whose survival is based on instincts. That is exactly what we share among us as we live in turbulent times where people just observe forgetting to feel, we want to spread the idea people to be more “present“, hope you understand.

Was your blues affinity a thing that brought you together to express yourselves through the blues idiom?

Yeah, all band members have been around for long years playing blues, soul, funk and other “blues cousins“. Our basic idea was to initiate something to preserve this beautiful form of music, because somehow we have a feeling that it is getting lost in these parts. At the same time we wanted to present mostly of our own material as we think that as artists we somehow need to leave our stamp one way or another, trying to keep the blues alive in a way through the original author’d expression.

Who are the members of the band?

That’s connected with the name of the band, as we are kind of a pack, more musicians can get involved, depends on the situation, but the core of the band are Aleksandar Giorgieski (harp and vocal), Theodor Boskov (bass), Gligor Dinev (drums) and me, Dimitar Danevski (guitar).

Before you got together, have members of the current band played somewhere else with their own projects or something?

Well yes, for quite some time I have tried unsuccessfully to form a cover blues band, and the other guys have been on the local scene for years playing in the band called Onija doing blues, funk, soul and rock’n’roll covers. When I met them, we had a couple of jams together where we got to know each other better, musically speaking.

Few words about you debut album, “Gambling Man” (2018), where did you record it, who did the cover design…

Believe it or not, I wrote the whole material in a few days! That was a time period when I have some turbulent personal issues, and yes, there was a woman involved, so you may say I was not a good company to have around, ha ha ha! So many things happened, so that I managed to put some of that in textual and musical form of the blues. It was kind of unintentional thing, it just clicked and got personalized in the form of album. Of course, none of that would be possible without great effort from the guys in the band and their creative force to add spice to the material! The whole thing was done in a private studio with Vlatko and Branko Saplamaev behind controls, who also appear on a few songs on the album. Our good friend Giorgi Vacev was producer of the whole thing. Regarding the album’s design, I was doodling some sketches in my notebook which came to life thanks to our excellent designer Darko Stojoski.

It’s not a common thing for blues debut album to be completely based on your own material, without any blues covers which is an usual thing when it comes to this kind of music. What does inspire you for the music you create?

Anybody in the band can come up with an idea and if we all like it, we work on it. So far, I am in charge of supplying the musical form of the material, especially lyrics, but with assistance of all in the band. I also have an idea to try to incorporate a song or two of some of our established poets into a rock’n’roll song with bluesy feel, hopefully it might happen on our next album. Also we plan to expand or possible designer’s circle for future projects, having in mind one special person who touched me with her energy, body of work and all that she is, but for the time being, it’s stays a little secret! 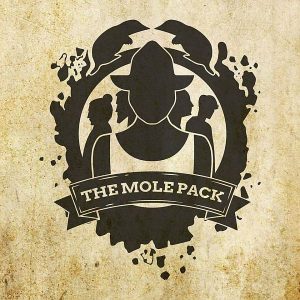 Do you practice regularly during the week?

Not really. It depends on our daily schedules, various jobs and duties.

Who, would you say, are your biggest influences when it comes to blues?

Wow… too many! Personally I would say Eric Clapton is my biggest influence and inspiration for many things. He “introduced” me with guys like Robert Johnson, Son House, Muddy Waters, Howlin’ Wolf, Jimi Hendrix, Skip James, Big Bill Broonzy and many more.

If anybody would ask who your music remind of, what would be your answer?

Hopefully The Mole Pack! We are trying to get close to the spirit and energy of the sixties with our personal touch!

Anyway, live on stage, you probably do some classic blues material, correct?

Of course, depends on the moment. Our last gig featured a couple of Freddie King and Howlin’ Wolf classics.

Are you satisfied with your current band equipment or plan to expand it with a few newies?

Well, we don’t complain, we use what we have and that is not bad. Of course, we all have our wish lists and hopefully we’ll get better and better with the times, depending on financial and other priorities we have. I plan to have a few more guitars in my collection – some Stratocaster, Gibson 335 or Les Paul – typical “guitar player’s disease“, ha ha ha!

Where did you perform so far, regular gigs?

Being a band with our own material and one album so far, reality and small potential market, we don’t play so often. We have fine following of our fans who are regular at our gigs. We played a lot of gigs in Skopje and Macedonia, festival Rock United in Kosovo, and recently at Skopje Blues & Soul Festival.

What is next for The Mole Pack?

Next plans are to record our second album, complete material is ready and it’s just a matter of time when we’ll go to studio and do it. Of course, it depends on the circumstances which might not be always in our favor, but it will be done in the very near future. We do what we can to keep this music alive as much as possible and hope to do it on international basis, to reach more people, that, you can say, is our blues mission.

YT – The Mole Pack – Have You Ever Loved a Woman (Live)