Svetlana Bliznakova Iliev Sevi is singer and songwriter, plays piano. She was born on November 11, 1983 in Sofia, Bulgaria. She started solo music career in 2005 and since 2010 she fronts the Bulgarian rock band Sevi. Sevi began singing when she was two years old. Eight years later, she went to “Philip Koutev Folklore Ensemble” and started learning national Bulgarian folk singing for two years. After, she began studying opera singing, and in 2002 she entered Sofia University in an opera class in order to develop her music skills. A year after, she found herself in the pop and rock music and decided to start over and entered the class of Etien Levi, a famous Bulgarian pop singer of the 1980s. In ten months, Sevi started performing on stage, and soon after, she started to write her own songs. Later, due to her visits in Italy, she began writing songs in Italian, along with the English ones.

In 2004, Sevi won the first prize and the special award of the jury, participating at the “National Competition for Singers“, in Sofia. In 2005 with two original songs she participated and won the first prize at the “International Belozem Festival“. These two songs were published in the Festival CD compilation for 2006. Again in 2005, Sevi was invited by the Italian producer Rocco Milano to take part in a CD compilation with her song “On My Own“, co-written with Pino Biaggioli and recorded with the Italian rock band Eldritch. The compilation was edited by the organization “Art’s Planet“.

In 2006, Sevi participated with an author song on the “International Pop-Rock Competition for Singers and Composers” in Veliko Turnovo. By now she has written more than 50 songs in English and Italian. She has been the only Bulgarian singer to sing in the show of Sky Italia, in “Club Lost“, during the San Remo Music Festival in 2007. She co-written many new songs with Rally Velinov (musician and songwriter, who is also author of the arrangements of many of her recordings, and later became a bass player in the band Sevi).

In summer of 2008, Sevi recorded 11 new songs in collaboration with Rally Vellinov and the guitar player Peter Bratanov. Six of them she presented on one hour live interview on “WSF Radio Chicago” on July 4, 2009. In August 2009 her song “Fighter For Happiness” was presented on “Many More Radio UK“. In January 2010 in order to develop her career and popularize her music, Sevi together with Rally Velinov, formed a band also called Sevi.

The band Sevi was formed in January 2010 by Svetlana Bliznakova with the musicians – Valentin Nikolov (drums), Tania Apostolova (keyboards), Rally Velinov (bass guitar), Todor Todorov (guitar) and Vladimir Donkov (guitar). In August 2010 the two guitar players were replaced by the former guitarist of the alternative rock band Awak – Peter Bratanov. In March 2011, lead guitar of the band became Ivan Angelov, who left in the middle of 2012 and soon after, on May 30, 2012, lead guitarist of the band become Bobby Zasheff. Two weeks later, on June 14, 2012, Sevi released their first official album “What Lies Beyond“. Right after, the same month, the band started a national summer tour to present the album. On December 9, Svetlana “Sevi” Bliznakova presented her collaboration with two DJ‘s. – “Sevi feat. Sugar DJ’s” with their featuring track “Shocked“. (Wikipedia)

Currently, Svetlana is on two tracks – as member of the band Sevi – and as solo artist. This review is dedicated to her current release – album “Tomorrow“. 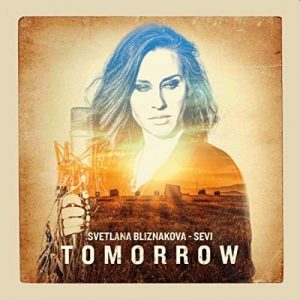 I asked the famous Bulgarian journalist, editor of several radio and TV music shows, Vasko Gromkov, I met during several Gitarijada Zaječar events, that he, for introduction to us, proposes some good Bulgarian rock bands. Without a lot of thinking he said three names – one of them was a band named Sevi. Band Sevi is marked by the brilliant voice of Svetlana Bliznakova Sevi. Had an opportunity to follow music career of Svetlana via two CDs and to present her music in my radio show Krilati kotači (Winged Wheels).

In a short period of time, Svetlana achieved great results with her singing quality. She can, without wondering – what am I going to do here – perform on every stage of the world, be it in Europe or much further. The certainty of her vocal interpretation is evident, and her music has no weak points. Svetlana sovereignly rules ballads, as well as faster rhythm songs. She sings in English which gives her an extra “wind in the back”. As an author, Svetlana signed most of the songs from album “Tomorrow“, but that is why she signs the lyrics of all the songs, she is the lead vocalist, and she also sang the backing vocals. The musicians who accompany her with their instruments are great professionals and they gave to Svetlana excellent instrumental support.

Following the music work of Svetlana and her band Sevi so far, I know that they were often on tours, that they played live. At this point in the viral pandemic, those activities have almost stopped. This will greatly reduce the “range” of the songs from this remarkable album. Again, I hope that quality will find a way to reach those for whom it is intended – the listeners that values enduring values.