Volkwin Müller has been traveling with his songs as a musician for over 25 years. In the meantime his songs have been immortalized on numerous CDs and various radio and television appearances which are behind him. His development co-workers and musical guests on this path include Klaus Voormann, Julian Dawson, Purple Schulz, Uli Bögershausen, Klaus Weiland, Uli Kringler or the English saxophonist Nigel Hitchcock, who is touring with Mark Knopfler today.

In 2011 Volkwin received an invitation to concerts in Paris and the music festival “Fete de la Musique” in the French city of Lieusaint. He conquered the French audience with his own compositions in German and with individual interpretations by John Lennon, Sting or James Taylor.

Since 2012, Volkwin has been on tour throughout Germany with the Hamburg actor, author and musician Achim Amme as part of the “Lennons last years” program. In addition, since 2013 Volkwin has appeared at irregular intervals with the Lennon and Yoko Ono biographer Nicola Bardola in the context of multimedia readings, including in the Café of the Munich Muffathalle or in the Swiss Sent.

His catchy voice, his accomplished guitar playing and his stage experience make the Detmold (place where he lives) songwriter a special experience in concert. The man – that much is certain – needs no backing from a band, no patience, no ripcords. On the contrary. What drives him is the best hand and mouth. Sometimes also footwork when he literally stacks his folk-related songs on the floor with his foot drums.

He has recorded his CD “Mit anderen Augen” with special musicians from Hamburg producer and exceptional guitarist Uli Kringler. The result is twelve songs about solidarity, friendship, love, loss and a change of perspective. Musical moments full of images and emotions that have rarely been so beautifully dressed in words and melodies.

His songs are intense and offer impressive levels of musical and emotional intimacy. Mature songs that encourage you to look at your own life with a little more distance, in the end maybe to see it with different eyes. Volkwin proves to be a talented songwriter in search of the perfect song and with his songs he creates catchy tunes that pack the listeners warmly, as if they wanted to protect them from the approaching autumn with its rainy weather and stormy winds.

The music takes you on a journey into the universe from which you don’t want to come back so quickly. His music and lyrics show a versatility and depth that only a few German songwriters create. 100% Volkwin, inspired by gentle influences such as Jackson Browne, Justin Currie (Del Amitri) or David Crosby.

His current release, album “Auf dem Weg“, is another proof of the richness of Volkwin‘s musical nature. 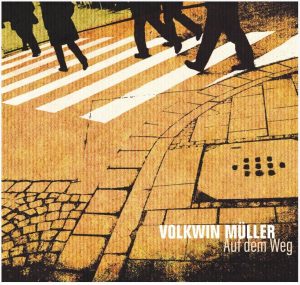 Thanks to Volkwin‘s professionalism, I may be the only one in B&H who has personally received his previous recordings. Also, his current album, “Auf dem Weg“, came to my home address. Many other musicians, worldwide, could learn from Volkwin how to run PR part of the musical business.

Musically, Volkwin is a true artist. His Americana is filled with beautiful harmonic lines and an emotional voice. The musical accompaniment of his team is unobtrusive and at the service of underlining the basic atmosphere that each song carries. Volkwin sings in a calm voice, as if in an intimate space he speaks only to you who are listening to him at that moment. on the other hand, his interpretations bring him a large number of visitors to concerts he organizes. This is a sign that he has found the right measure for how to model his song.

With more than 80 million inhabitants, Germany is a large country, but it is also home to a large music market with many great musicians. In such an environment, Volkwin fought for himself and his music. That struggle and proving him daily earned him great deserved respect. The album, “Auf dem Weg“, will only confirm its current status, which is already high, and will even increase the number of those who will join the army of those who love and appreciate its musical work.