The longest running blues festival in this part of Europe celebrated its twentieth anniversary with some cool acts who presented their brand of blues of the highest order. In the past twenty years the stage in Skopje was shared by people like Mighty Sam McLain, Michael Hill’s Blues Mob, Eric Sardinas, Bernard Allison, Lucky Peterson, David Honeyboy Edwards, Sherman Robertson, Phil Guy and many more including some of the best European blues guys including Mick Taylor, Ana Popovic, Nine Below Zero etc. 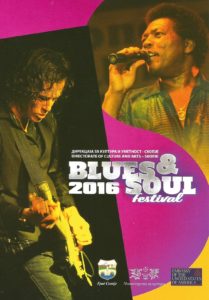 Terry Evans, longtime vocalist in Ry Cooder’s band, who will celebrate his 80th birthday next year, still has a great voice that dominated the stage in Skopje performing his best material of his celebrated career. Backed by an excellent band which featured fine guitarist Joe Colombo, Terry Evans proved once and again why he is considered as one of the best blues and soul vocalist on the scene today, one of the few left of that golden generation. Great choice of material featured “Down In Mississippi“, well known song he used in the movie “Crossroads“, great version of “Ain’t No Sunshine“, “Smokestack Lightning“, “Crossroads” and other classic stuff that delighted everybody.

Raw Hide from Serbia proved once more why they are considered as one of the best European bands sharing the stage with cool guys like Louisiana Red, Magic Slim Joyhnny Mars and alike. Their brand of classic Chicago blues with nods to early Mississippi blues was enthusiastically greeted by local fans. Led by Jovan Ilic, an excellent harp player, they did a great job performing stuff by people like Little Walter, Junior Wells, Sonny Boy Williamson II and others spicing the material with their own arrangements. Raw Hide did a great job and if you are looking for masterful band with cool stage presence, this band is a natural choice!

Billy Merziotis and his band After Hours, from Greece, did a fabulous set of classic stuff and their own material. Led by Billy, an excellent guitarist and his fine band that included beautiful Irene Movia with great voice, they played their own material plus some well known stuff by Fleetwood Mac, Free, Janis Joplin, Rolling Stones and Led Zeppelin, among others. But the highlights were songs by Gary Moore. Billy Merziotis and the band did fantastic versions of “Still Got The Blues” and “Parisienne Walkways”! The audience had a feeling that Gary Moore’s spirit was in the venue, truly brilliant. And as a matter of fact, Billy Merziotis toured England this Summer backed by the original band of Gary Moore and it was so successful that they will do it a few times more in the future, need we say more?

This year’s closing act was Ryan McGarvey Band that featured bassist Carmine Rojas who played with who’s who of rock, blues, soul, you name it (David Bowie, Rod Stewart, Stevie Ray Vaughan, Eric Clapton, B.B. King, Carlos Santana…). Ryan McGarvey is young up and coming guitarist and I am sure that he will soon become one of the the best blues rockers on the scene. His talent was recognized by Eric Clapton who invited him to perform at his great “Crossroads” festival, and also by people like Joe Bonamassa, Walter Trout and Kenny Wayne Shepherd, among others, who invited him as a guest at their gigs. Macedonia was in Ryan’s European tour agenda which featured 11 countries. He’s a stunning guitar played who did a great job on Skopje stage performing songs from his latest album “The Road Chosen” and some great covers which included a fantastic version of “Spanish Castle Magic” by Jimi Hendrix! Local fans didn’t want him to leave the stage and Ryan was happy to oblige!

All in all, great time was had by all, blues vibe was in the air for three days of the festival and we can’t wait for the next edition, which, as per some information, will be even bigger!