After touring the world with his bands, Yapa and Joke, and composing for many singers from France and abroad, the guitarist Simon Chenet embarked on a solo adventure. Accompanied by trumpet player Timothé Petter for a touch of Swing color, Koto Brawa on percussion and vocals to add some Afro chili, Mauricio Santana on guitar and vocals for Latin heat, all backed by the musette eloquence of accordionist Eric Allard-Jacquin, Simon is turning on another page, he decided to produce his first solo album. The title of this album is “Elle m’a dit” (She told me). Album is “…dedicated to my wife for what she told me just before I started to compose the different sounds. It is also a nod to all the beautiful things that happened to us since then“, said Simon. This album is the natural next stage for Simon. Now with some different musical experiences, he hopes it will be a stepping stone for his musical future. 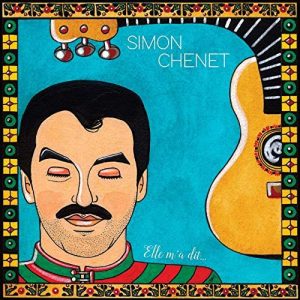 Each musician with great musical experience, sooner or later, decide to make solo album. Why Simon Chenet would be an exception. Moreover, he has a lot of justification for that and a lot of good reasons. Simon sublimated all the musical influences that he was surrounded by in his long work on the world music scene. Of course, on his solo album, he gives us the best he has witnessed.

Although a Frenchman from a country with a rich musical culture, Simon transcended the borders of France and imprinted on the musical expanses of African and Latin music as well as swing. Musicians with whom he collaborated and who brought to him the color, spirit and atmosphere of the tradition they grew up in, were immeasurably influenced by the sound of his songs. Of course, Simon blended well with his colleagues, so that the boundaries of different musical cultures were not even visible.

Although not the sole author of the songs presented here, Simon‘s name stands with each of the 8 songs, which confirms that he had a great influence in each song, that he kept everything under control. The music played by Simon and his crew is a joy to listen to all over the world. His songs are rhythmic, melodic and full of optimism. These are the reasons for Simon to appear on music stages throughout Europe and to be a well-received band everywhere and a happy guest. Please, pay attention to this musician.