“I find something new in what I am playing“

VI: You still play a lot, do tours throughout the world. How do you manage to do it after so many years, is music still your guiding light to go on and on?

Sam Andrew: Music is always exciting. Maybe on fourth of the time, I find something new in what I am playing. I am not in the race to be the fastest guitar player in the world. I want to find something really new in the melodies and bring that out for people while playing something they want to hear. Since I will never accomplish this completely, I can never be bored with the music. It’s always a challenge.

VI: Beside playing some old favourites, I suppose you write also new songs. How is public reacting to your new material? Is your musical direction still the same or you’re trying to break new grounds?

Sam Andrew: Yes, I write new songs all the time. The public seems to like them. I think my musical direction changes all the time. In each song, I try to do at least one new thing.

VI: What could you say about the current music scene around you, is it comparable to the sounds of those days. I think you’re the one who could tell it best?

Sam Andrew: Musicians are better now. They have better technique and they have better education. They are probably more disciplined too, than we were. But I don’t think they have the same inspiration that we did. There is not that wild sense of promise in music now that there was in the 60’s. And having that feeling is very important for an artist. It gives a focus and direction to the music. But I think this feeling can come.

VI: Are you / band in control of Big Brother releases through the years, numerous compilations, unreleased concerts, live tapes, etc?

VI: I wanted to ask you about the record covers of your releases, especially the one made by Robert Crumb. Do you remember how it happened? Also about other covers, who had the final say? 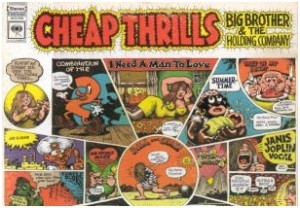 Sam Andrew: When it came to decide on a cover for “Cheap Thrills” album, we were all reading those great underground comics, but especially Zap Comics. We knew all the artists, Victor Moscoso, Wes Wilson, S. Clay Wilson, Gilbert Shelton, Mouse and Kelley, but the eminence grise was of course Robert Crumb. I think we decided on having him do the cover because we wanted to get to know him better. Janis wasn’t the one who made this decision, although she was enthusiastic about it once we all agreed. Crumb came to where we were playing… the Fillmore, I think… and he watched us all for three hours or so. The idea was that he was going to make our album cover like a high school yearbook and it would show our photograph and then have a little biographical blurb about us. For the original front of the album he drew a yearbook cover. We really didn’t care for that front (although, don’t I wish I had that drawing today!) and we put the “back” cover on the front. That “back” cover really looks like a back cover if you know it was supposed to be a back. It’s basically a series of credits for who did what on the album. 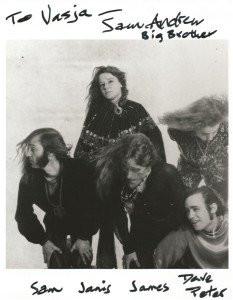 Big Brother and the Holding Company

The amazing thing about Crumb is that he could come and look at us for such a short time, and in his drawing of us he revelaed who we were, or who we were trying to be. The image of James Gurley shows him to be spaced out holy man, The Saint James, Archfiend of the Universe, that he is today. The drawing of Dave doesn’t show him at all, and that too is a revealing portrait. I have often thought that the other name for Big Brother And The Holding Company should be “Where’s Dave?” because he constantly wanders off and is nowhere to be found. He is really lost. Janis looks, in Crumb’s drawing, exactly as she wanted to present herself and anyone who knows Peter Albin knows that he is the person in Crumb’s drawing. I was at that concert where Crumb came to look at us with a couple of good friends of mine who are still good friends of mine. They were blond and they were having a really good time. We all enjoyed being with each other and they were intelligent, articulate and fine women. Crumb drew me surrounded by blondes and he tured a certain smirk (better than George Jr. Bush’s) of self satisfaction on my face. It’s just a portrait of who I was at the time, but the blonde women were friends and not fans. The Kozmic Blues Band was almost a corporate band and its cover reflects that. That cover was done by the art department at Columbia Records. They copied the Crumb Lettering. All of that cover was their idea. Janis had very little to say about the design of that cover. We did two albums after Janis died. One of those covers is anti art and it is by Bob Seidermann (who did the famous Blind Faith album cover). The other album is done by Dennis Nolan who is an excellent artist. He just did a silhouete of us, but it shows who we were at the time, silhouettes of musicians trying to make it into the early 70’s.

VI: Is there anything you’d like to say to your fans in Macedonia, especially those who knew you from the beginning and still keep your old records and love you?

Sam Andrew: Yes, of course. I would like to say thank you and I wish I could meet each person in Macedonia. I am sorry that we didn’t know each other before, and I would like to come to Macedonia and see what your life is like and be with you. This could be very interesting.

VI: Who knows, maybe we’ll meet in Macedonia some day?

Sam Andrew: You don’t know how much I wish this were true. Let’s make it true.