Spanish heavy metal veterans, Dragonfly, are considered a major inspiration all around the world, and are specially praised in the Hispanic heavy metal scene. Combining a perfect execution when playing their instruments with a striking passion, the Valerian act offer a captivating and emotional Power Metal sure to leave you hooked. After releasing five critically acclaimed studio albums by the international press and the genre connoisseurs, showing them their support in each and every step of the way; Dragonfly has toured all around the world (USA, Mexico, Latin America…) alongside renowned acts such as Mago de Oz, Medina Azahara or Saratoga alongside many others. 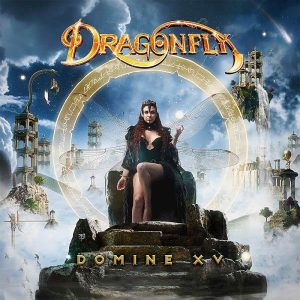 Dragonfly are back with the re-recording, remixing and remastering of their debut album “Domine” (2006) giving a new life to this Heavy Metal classic. The Spanish act are releasing a double album with the best international collaborations (Tete Novoa, Pacho Brea, Joaquin Padilla, Miguel Angel Franco…). This double album has been recorded at The Mixtery by Raúl Abellán and mixed and mastered by Simone Mularoni (DGM). The legends offer us one of the jewels of 2022 and an ode to one of the classics of Spanish Heavy Metal. The worldwide release has been on November 11, 2022 via Art Gates Records.

Dragonfly play heavy metal rock, and I would add melodic as well. As the manager of the long-defunct but also very successful melodic heavy metal progressive rock band from B&H, Southern Storm, I know what I’m talking about. All segments in the music of the band Dragonfly are impeccably done – compositions, arrangements, vocal and instrumental performance… everything is excellent and without any complaints. I have to repeat and point out – Dragonfly sing all their songs in Spanish and I take my hat off to them for that.

Every quality, which is the basis of everything else, should be accompanied by a serious publisher. Much of what follows in a positive sense the success and wider recognition of the band Dragonfly is largely and professionally supported by the publishing house Art Gates Records. Thanks to the hard work of the staff at Art Gates Records I was given the opportunity to receive and listen to this valuable material. Thanks to all that, I can give my humble opinion about everything I heard on this album.

If it means anything to the members of the band Dragonfly – they “bought” me forever with their music. I will eagerly await their next releases and I am sure that their career will be on an upward trajectory.

YT – Dragonfly Ft. Anna Fiori – Regresa a mi (Come back to me)