Amsterdam Connection (formerly, Team Harmony) is Amsterdam based jazz duo formed by the passionate musicians – Tim ‘Harmony’ Welvaars (jazz harmonica, piano) and Naomi ‘Smile’ Adriaansz (tenor, alto sax). This unique team is based upon its intense love for music in general as well as the love that Tim and Naomi feel for each other and the world around them. From this source they have created a unique sound – the remarkable fusion of the dark tenor sax and the joyful harmonica. Their trade mark! Their main driving forces – filling everyone with harmony and peace, at any place where Tim and Naomi are invited to play their music live!

Tim Welvaars (Amsterdam/Holland) has played jazz harmonica and piano. He recorded with Stevie Wonder, Toots Thielemans, Kenny Burrell, Jose Feliciano, Ray Brown, Mel Lewis, Lee Ritenour, Jan Akkerman, The London Symphonic Orchestra, The Metropole Orchestra and many others. As Toots Thielemans’ first and only student, Tim is continuously passing on his skill, as well as his love for music in general and the chromatic harmonica in particular. Tim has had the honor of replacing both Toots Thielemans and Stevie Wonder in the studio, as well as being the only (other) harmonica player to be featured at Toots’ 75th birthday concert. As an artist, Tim has recorded 28 solo CD’s, and is featured as a soloist on over 300 CD’s. Besides chromatic harmonica, Tim plays saxophone and piano and is an active composer, arranger, conductor and producer. Tim won several music-awards a.o. The Henny Huisman Soundmix-TVshow (NL, 1996) and the World Championship of Performing Arts (Hollywood/Californi, 2003), as a Jazz harmonica-player as well as a composer. Website: www.timwelvaars.nl 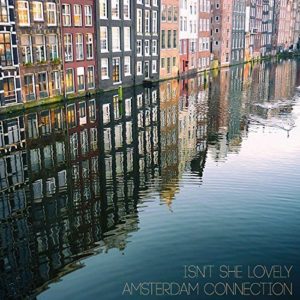 All of them, in more detail informed about the content of my radio shows series, “Jeans generacija“, know how much importance I gave to tribute bands / artists / albums. I considered them as being as good as the originals, of course, if they had artistic quality sufficient for radio presentation. I did not count, but I had more than 50 tribute editions featured in that radio show.

This time, I am honored to present / review Amsterdam Connection (Tim Welvaars & Naomi Adriaansz) and their album, “Isn’t She Lovely” – Tribute to Stevie Wonder. They recorded 10 Stevie Wonder’s classic hits presented in their own way. After listening to it may say – they completely fulfilled their mission – spreading harmony and love through their instruments and music and their driving force is filling everyone with harmony and peace. They achieved these goals. No wonder that Stevie Wonder stated – “Tim is a genius on the harmonica!” and T.K. Blue stated – “Naomi is an extraordinary musician of the highest caliber.“

When I read all the above, the facts about this duo, I ask myself – whether they are from this planet or… Of course, they are from our planet, but it seems that they have special ability to express the music in a way that everybody of us remain breathless. Not so common combination – jazz harmonica and saxophone – here works perfectly. From time to time Tim’s instrument is having leading role, time to time Naomi plays main role and in the next moment, they are playing together as to maintain eqaul dialogue.

Well-known compositions of Stevie Wonder in their interpretations received a new form. Music is written with notations, but notations are not so perfect to pass sensibility that a piece of music should transfer from its creator to his listeners. This ability has to have a musicians whose performs particular composition. Musician’s role is the biggest in order to evoke the composer’s intentions the best possible way, bringing in some work and a part of themselves. With this release Amsterdam Connection (Tim Welvaars & Naomi Adriaansz) proved they have that ability.