I had the pleasure of attending the Thanks Jimi Symphonic concert in Wrocław, Poland at the recently opened Narodowe Forum Muzyki music hall on January 10, 2017.

The concert was the 25th Jubilee of Educational Activity of one of the best Polish blues-rock guitar players, Leszek Cichoński. He was the first in Poland to prepare an instructional course with audio tape for guitar players, Blues-Rock Guitar Workshop, in 1991.

Two things were apparent from the first note. First, the quality of the hall’s acoustics are spectacular, and, second, the power and appropriateness of the surprisingly original orchestral arrangements created by Cichoński. He managed to honor the classical tradition while simultaneously remaining true to Jimi Hendrix‘s material. It did not feel forced, as it easily could have, and the musicianship was at a high level all around. 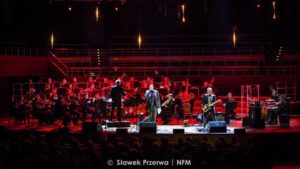 Cichoński has become associated with Hendrix‘s version of “Hey Joe,” as it is the centerpiece of the annual May 1st Thanks Jimi Festival he created in Wroclaw, where thousands come together to play the song. In fact, the Thanks Jimi Festival currently holds the Guinness World Record for Largest Guitar Ensemble with more than 7,000 guitar players.

At the Thanks Jimi Symphonic concert, Cichoński gave the song a more original interpretation, presenting it as a bolero and with singer Jorgos Skolias (an odd choice to an American ear, but a national legend in Poland who clearly resonated with the local audience).

“Voodoo Chile” started with a great, mystic introduction, and had a strong, slow, and dark down-tuned atmosphere. Cichoński took the vocals and playing an amazing solo while walking through the audience.

“Purple Haze” was given more of a hard-funk arrangement, and it featured vocalist, Storyville singer Malford Milligan, who brought much of Jimi’s vibe.

“If 6 was 9” was the strongest tune of the night for me, with all of its various disparate elements in excellent alignment. Cichoński‘s tribute “Thanks Jimi” — with English lyrics by Milligan and guitarist Greg Koch — made for a powerful closer, and, in the last section, Milligan was joined by Skolias. The two singers took turns in Polish and English, as well as singing the chorus in unison.

The sell-out crowd, like the material itself, was a mixture of symphonic and rock cultures, and there were three standing ovations demanding encores.

The arrangements and presentation clearly touched the Wroclaw audience, but the performances were world class, and Thanks Jimi Symphonic would be strong on any stage anywhere in the world. 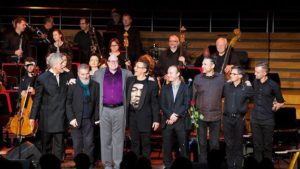