ISMO HAAVISTO ONE MAN BAND – The Blues has Chosen me

Dragutin Matosevic 01.March 2018 9:52 Comments Off on ISMO HAAVISTO ONE MAN BAND – The Blues has Chosen me
Kategorije » Recenzije

Ismo Haavisto is a professional blues artist from Finland. His 30-years long blues career provides his great performances. The blues comes from the dept of his soul. He is known as great singer, harmonica player, guitarist and songwriter. He released 9 albums so far, and 8 of them are mostly with his own music. Ismo plays gigs in several formations – as one man band or with trio. Ismo Haavisto (as One Man Band) is the hardest working ensemble – he works as well in living room as at festival. His trio plays over 12 years together. 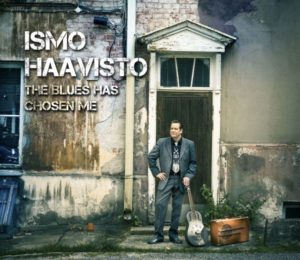 It’s nothing new if I say that music does not recognizes the boundaries. Good music will overtake the continents by conquering the hearts of musicians who will recognize its mode of musical expression in its roots. A nice example for that, among many others, is blues. This genre developed from roots in African musical traditions, African-American work songs, spirituals, and the folk music of white Americans of European heritage. This genre developed in many variations but, despite many mixtures, kept its unique recognition.

In the case of album, “The Blues has Chosen me“, we have a chance to meet blues played by musicians from Finland. Album, “The Blues has Chosen me“, consists of 10 Ismo‘s original songs. Two of them were performed by solo and eight by trio. This album has music which is showing two Ismo‘s sides – rough electric blues and smooth acoustic blues. In both cases – you will witness a true blues performance.

The title song of this album lists all the life philosophy that is the guide to Ismo Haavisto. In that song his mother asks him not to leave home, to devour the hell of herself, to pray to God … Ismo‘s answer goes through the text of the song: “…I wanna ramblin’ ’till the day I die … now you got to set me free, ‘cos the Blues has Chosen me…“. How frankly these words are, so honest is the blues interpretation of this artist. The whole album’s lyrics are in the similar sense.

Finland is a relatively a small country. It should not be surprising that musicians of similar stylistic orientations associate at an international level. So it is noted that Ismo cooperates with our old friends – blues musicians – Timo Teippi and Andres Roots (from Estonia). This gives the both sides an opportunity to perform together, to share experiences by mutually enhancing their musical expressions.

At the time I did run the Jeans Generation radio shows (2004-2008), blues music had a prominent place. That’s going to be the same in my upcoming radio shows – Winged Wheels – that will start in the fall of 2018. I am hardly waiting it happens in order to (among many others) present to the public and Ismo‘s music. He, his music, really deserve it.

YT – Ismo Haavisto One Man Band – Midnight Man (video from Aki Kaurismäki movie, “The Other Side Of Hope“)