Composer and instrumentalist, Ana Patan, draws inspiration from a variety of cultures and styles, from jazz to rock or even flamenco or calypso, anchoring into a well documented modern reality. Herself a mixture of influences/languages/habits, the German of Romanian descends, based in Sweden, grew up in a whirlwind of old European art values and has been soaking in the novelty of each place of influence, from the ancient republic of Venice, to overwhelming New York, melting pot Istanbul or diversity metropole Hong Kong. 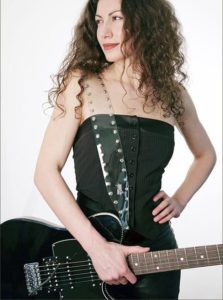 Be it on festival stages, in art galleries or culture clubs, Ana‘s sultry voice, guitar playing abilities, but most of all, her impacting genuineness have been gaining her recognition and remarkable public sympathy. Intellectual, funny and relaxed, with surprising estethics and energy, her music is a multi-facetted hymn to everyday life, a mirror held to individual and humanity with all faults and splendour.

Ana’s brand new release, announcing her much anticipated album “Spice, Gold and Tales Untold” is now available on Amazon, iTunes, Spotify, Bandcamp and pretty much all over the net. Under the name “General Conspiracy“, it is a funny description and a groovy ode to the beautiful helplessness of human beings in their daily frantic race for control. Click on the link (down) to listen and eventually buy on Bandcamp.

Ana‘s immediate plans are to finish her album, featuring a few remarkable international musicians whose names are still kept secret until the final release! The recordings are all analog, on 2 inch tape and Studer 800 machines, and there will of course be a vinyl pressing release. The record focuses on themes of awareness, human nature and enjoying the present moment, from a surprising point of view and with a witty twist in the tail…

Next live concerts: May 28 2017, 4 PM, Romsey (UK), The Tipsy Pig. Be the first to find out when new concerts are announced, by registering for newsletter on www.anapatan.com.