The Sawmill Roots Orchestra was founded in 2017 and features – Aveli Paide on clarinet, Aigor Post on trumpet, Raul Terep on drums and Andres Roots on guitar. The band’s first single, “Meow Meow / Sawmill Stomp” was released in October 2017. Their debut album was released on March 2, 2018. The German Global Music Magazine describes the record as “blues of a new, unheard variety… An unorthodox, cool and extremely swinging blues album“, with the legendary Raadio 2 DJ Koit Raudsepp calling it “the hottest album in Estonia today“.

The Sawmill Roots Orchestra has appeared at festivals such as Sundays Blues Festival in Latvia and Tartu Bluusikuu, Underground Blues and Prima Vista in Estonia – at the latter, the band provided live music for two Buster Keaton silent films: “The Balloonatic” and “Cops“. 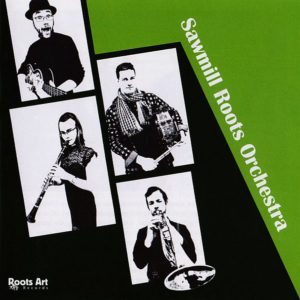 All those visitors who regularly follow the texts on the Barikada – World of Music web site are well known for the Estonian musician – Andres Roots. It is a musician who is synonymous for blues from Estonia. No one in Estonia does this better than him. His ultimate art of playing blues has been recognized beyond the borders of that country. Andres Roots is often recording soloist albums, and is not limited to being involved in various (even international) musical collaborations. In doing so, his blues gets new and wider dimensions. That’s something should be strived by every serious musician.

The album, “Sawmill Roots Orchestra“, brings us the music of Andres Roots in a new light, with a new atmosphere. I believe this is the result of his synergy with the other band members who play on this album. Their music is successful combination of Mississippi Delta blues with New Orleans jazz, said Theo Volk, from Music That Needs Attention, Holland. I totally agree with this gentleman. The emphasis is on the term – a successful combination. Slide guitar, combined with clarinet, trumpet and drums, provide great opportunities and these musicians knew and managed to combines it well.

The album contains seven instrumental compositions, each is telling its story. Even though Andres Roots signs all the compositions, each of the musicians is fairly represented in their interpretations. Of course, each of them is the master of that craft. The music from this album is rich in dynamics, different rhythms, different atmosphere … its application can be varied.

The work of Andres Roots has been under my attention more than a decade, since the time when he acted in the Bullfrog Brown band. Andres Roots has justified my expectations, even this time. He made an album that I would often like to return to. With impatience I am waiting to share his music with the listeners of a new series of my radio music shows (“Krilati kotači”) that will be broadcasted since the Fall of 2018. Music like this builds the trade mark of my radio shows and will always be welcomed.