Since the beginning of his career, Roberto Dani has pursued a very particular musical research on the drumset; Most of his work is based on improvisation and the borders between improvised and written music. In particular, on his Solo performances he investigates the relantionships between sound/body/space. He focused mostly on interdisciplinary relationship with other art’s languages and performed with dancers as in “Mobiles“, “Duell(O)” based on a chess duel against a pianist played on an interactive chessboard, In the contemporary opera “Il Sogno di una cosa” as a percussionist/performer, commissioned to composer Mauro Montalbetti and Ensemble Sentieri Selvaggi conducted by Carlo Boccadoro. In contemporary theatre’s shows like “Luce Nera” and “Non ricominciamo la guerra di Troia” (for six drums ensemble and actress Patricia Zanco), Stefano Benni‘s “Baldanders“, “Oscillazioni” by Vitaliano Trevisan and composed original music for some of Trevisan‘s theatre’s works such as Quattro Stanze con bagno and Solo RH. Recently, together with Paolo Fresu and others, he took part of the soundtrack recording of last Ermanno Olmi‘s movie masterpiece “Torneranno i prati” dedicated to World War I. He also recorded ballet music for Teatro La Scala commissioned to composer Carlo Boccadoro… … … For more info, please, visit: Roberto Dani Website (http://www.robertodani.com/?lang=en) 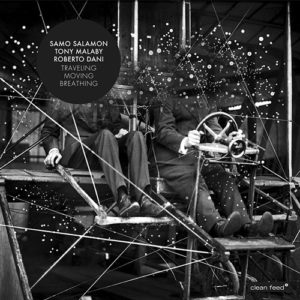 First of all, in the case of the album “Traveling Moving Breathing“, we meet three top artists, instrumentalists, who in jazz improvisation form perfectly understand one another. They do not compete with their instruments, they are harmoniously complemented by giving enough room for each of the three to come to full artistic expression. Their instruments, in addition to regular roles, got a much harder task, they had to go out of their regular abilities. At moments, the sound of their instruments gets an expression that is inherited by some other instruments.

These three musicians have a musical conversation characteristic of old well-known friends, whose eyes are enough to convey a message to one another. Their music is expressive, full of emotions and dynamics. Such a superb musical work can only be created by artists with great experience, those who have a great “mileage” behind them, who have experienced music from its various sides – courageously and without any fear – crossing its innumerable pathless limits.

The music from this album requires the listener’s full attention. You can not predict what’s waiting for you at its next moment. The musical ideas that these three musicians are submitting to are unpredictable and are the result of their great inspiration, which they have been forced to share with the creative moment in which these compositions were made.

The albums by Solo Salamon I have been already reviewed (and without intending to diminish the significance of other participants in his project), I would like to say that the way that Samo expresses his music is always fresh and inexhaustible.