Singer Salina Albert and the among ‘Gitarre&Bass’ readers well-known guitarist, Tom Riepl, have recorded an EP (“Almost Empty We Unplugged“) in which various acoustic guitars and a ukulele, discreetly supported by percussion, support the harmonic and rhythmic background for Salina Albert’s bell-clear and present voice.

Given that Tom Riepl has been already presented at Barikada – World of Music, let’ learn more details related to Salina Albert musical CV.

Salina Albert (*1987) is a semi professional singer, who basically works as a speech and language therapist and lives in Bavaria (Southern Germany). Back in her early childhood she already performed Disney Songs and hits by the Spice Girls for her family and friends. As a teenager she got into singers like Avril Lavigne, Michelle Branch, Kelly Clarkson and Dido.

By the age of 16, influenced by her parents’ record collection, Salina got more and more attracted by bands like The Rolling Stones, The Eagles, Led Zeppelin, Fleetwood Mac, Neil Young/CSNY and eventually started writing songs. In 2014 she made her first experiences on stage as a special guest singer with a local band. Before long she started her own band Sal’in’Acoustic, an acoustic trio. Salina’s “bell-clear and present voice” (Gitarre&Bass Magazine, wk) is carried by the soulful guitar playing of two experienced musicians (Werner Schreder and Josef Kaspar). Sal’in’Acoustic are covering selected Rock and Pop songs, and also excite their audience with a couple of original songs. Backing vocals and subtle percussion complete the interpretations. Within a few years they’ve played many successful concerts and built an appreciable fan base.

In 2016, Tom Riepl, a renowned guitarist and friend of the band members, came over for a gig of Sal’in’Acoustic. It happened that Salina and Tom discovered their similar taste of music beyond Sal’in’Acoustic’s repertoire. So they decided to do some recordings in Tom’s studio, just to see how the combination of Salina’s vocals and Tom’s unique guitar playing would work. Encouraged by the collaboration, Salina tried to sing more Blues songs, like tunes by Rick Derringer or Jack Pearson. Through Tom, she got to know the music of the Allman Brothers Band very well and also Joni Mitchell became an inspiration. Salina manages to capture the message and the feeling of a certain song, and then performs it in her very own and natural style.

After a few recordings, the aim seemed very clear and Salina and Tom decided to record an acoustic album. The result is the EP ‘Almost Empty We Unplugged‘, which was released in May 2020 by Tom’s label Tomtone Records. It pays homage to the golden age of Folk, Rock, Blues and Hippie music. Besides the five new interpretations of ‘Good Time Feeling‘ (Dickey Betts), ‘Big Yellow Taxi‘ (Joni Mitchell), ‘Give Me Some Money‘ (Rick Derringer), ‘Midnight Rider‘ (Gregg Allman) and ‘I Can Fly‘ (Barry Volk), Salina wrote the lyrics for ‘Home‘, an original composition.

The EP received great reviews in the German press (for example: Passauer Neue Presse, Gitarre&Bass Magazine, Die Musikseite) as well as in Bosnia and Herzegovina (Barikada.com). A highlight of the release was a radio presentation including an interview with Salina and Tom on KWMR, Point Reyes Station in California.

Due to the Covid 19 Pandemic, a live presentation of ‘Almost Empty We Unplugged‘ had to be delayed. Meanwhile, Salina and Tom worked on an extended live set, as well as on some new ideas for future studio recordings. Salina is excited to be back on stage as soon as possible, both with Sal’in’Acoustic and with Tom Riepl.

Comments: “Salina has a wonderful voice and really brings out the songs (…) she pulls off the American dialect perfectly.” / “Great voice Salina! Tom’s guitar fills perfect. Very pleased about sound…” / “I love what Salina did with the vocal…”

Six songs, including an original composition (“Home“), were recorded with great attention to detail and performed flawlessly. It starts with the Dickey Betts classic, “Good Time Feeling“, an uptempo swing that evokes associations with the legendary recordings of Les Paul and Mary Ford through Salina’s flawlessly intoned harmony vocals as well as the three-part guitar set in the middle section.

Joni Mitchell’s “Big Yellow Taxi” grooves a bit more relaxed than the original, without losing sight of the song’s spirit. The Allman Brothers cult song “Midnight Rider“, mutates into an almost mystical sound painting. In Barry Volk’s “I Can Fly” and “Home” penned by Tom and Salina, the only electrified addition we hear is a Stratocaster.

The album is multi-layered, without appearing overloaded, and guitar gourmets will discover new filigree details of highest string art every time they listen to. The transparent and dynamic sound of the EP, which can be purchased online at www.tomriepl.com, deserves special praise. 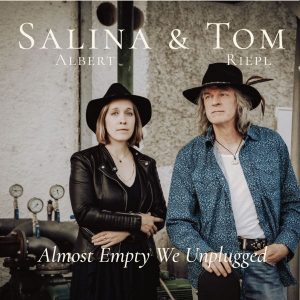 Tom Riepl is musician whose career I have been following for more than a decade. This was certainly not accidental, nor without very good reason. Tom has always managed to maintain the high quality of his artwork, to be current and interesting in all forms of his musical creation.

As a Bavarian, Tom goes to America regularly and is now trying to expand his music career there. This temporarily change of residence is not too much of a problem for him – he explained everything by saying that because of his hometown – Planet Earth. On the other hand, as a foreigner, a newcomer to a new environment, Tom had to be a “three times” better musician compared to those domicile musicians in order to cope on the local music scene. Fortunately, Tom had the capacity, knowledge and perseverance to reach that level, to fight for his equal status in the new environment.

EP CD, “Almost Empty We Unplugged“, Tom‘s current release he made with support of Salina Albert (singer). Styles included in these songs were folk, country rock, Americana, blues. I want to emphasize the brilliant purity of the singer Salina‘s voice, as well as the sound of instruments (guitars, ukuleles) in the hands of Tom Riepl. Although almost all the songs (except one) are covers, they were given a new approach which gave them a new artistic dimension. It is a confirmation that every song can be made even better than the original, because mere repetition, copying, has no purpose and leads nowhere.

I’m already wondering what further path Tom‘s musical career will take – with or without Salina. In any case – it will be the main “player” there – Tom – and that is already a guarantee that a new work worthy of attention will follow.