Leszek Cichoński is originator of the Guinness Guitar Record. Since 2003, thousands of guitarists have been playing “Hey Joe” by Jimi Hendrix every year in Wrocław. The current record from 2022 is 7,676 guitars! He played at the biggest blues festivals in the world, e.g. in Narooma, Australia and Monterey Bay Blues Festival, California. He has shared the stage with guitar giants like Steve Morse (Deep Purple), Jennifer Batten and Steve Vai. Leszek Cichoński has collaborated with Tadeusz Nalepa, Wojciech Karolak, Jerzy Styczyński, Tomasz Szukalski and American bluesmen: Carlos Johnson, Stan Skibby, John “Broadway” Tucker. Leszek Cichoński‘s last four albums were nominated for the prestigious Fryderyk Award. In 2017, he was awarded the “Gloria Artis – Merit to Culture” medal of the Minister of Culture and National Heritage and the “Meritorious for Culture” medal of the city of Wrocław.

Leszek Cichoński is a revered figure on the Polish rock scene, known for steering the award winning “Thanks Jimi Festival” for 18 years as well as his educational work. And “Thanks Jimi Symphonic” is surely his most ambitious undertaking. 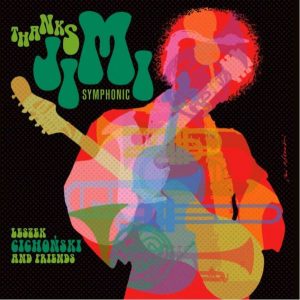 I have been following the musical path of the Polish guitar virtuoso, Leszek Cichoński, since 2001. That path of his always moved him in an ascending line. The point of my interest in his work was our mutual interest in the music of the greats of the world music scene – Jimi Hendrix. Thanks to the annual musical events, Thanks Jimi Festival, which was held on an annual basis, every May, in the main square of the Polish city of Wroclaw, this great enthusiast was heard even outside his native Poland.

The concept of this unique manifestation was such that a music program based on the musical legacy of Jimi Hendrix would be prepared during the scheduled time of the Thanks Jimi Festival, and the audience, in large numbers, brought their guitars. The highlight of that event was the joint playing of the song “Hey Joe” by the musicians on stage and the audience present. In 2022, there were 7,676 participants with guitars, which was recognized as a Guinness record.

Leszek Cichoński And Friends, with album, “Thanks Jimi Symphonic“, prepared one of the best orchestral and rock band albums of the recent times. Arrangement and orchestration mutually worked – Leszek Cichoński with ScoreArt Group – Marlena Musielak (Mruz) & Jakub Zwarycz. Without any doubt, they made the music of this album masterful.

The Symphonic Orchestra of National Forum of Music in Wrocław (The NFM Wroclaw Philharmonic) has the main role. Of course, there is also a rock group to underline key points from Jimi Hendrix‘s hits with their influences. The symbiosis of those two worlds – classical and rock – is the inestimable value of this discography. It is rare that in the near future we will have the opportunity to enjoy similar interpretations of the top musical works of Jimi Hendrix, which he left us in the world archives of the greatest human achievements. Thanks to Leszek Cichoński for his vision and ability to bring us closer and present Jimi Hendrix‘s music in a new way.