What we are not aware of, does not mean that it does not exists. I was very lucky to meet a blues guitarist, composer, artist… from Estonia, Andres Roots, long time ago. Andres proved to be a great professional and he regularly supplied me with his new record label releases. So this time, I got his current album product, called “Mono“. Of course, Andres is still in the area in which he is best known, giving him the best chance to get away with his artistic intension – that is blues. 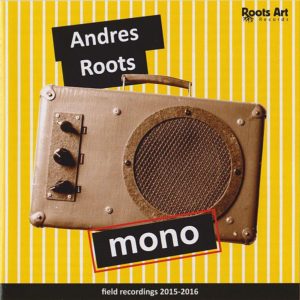 Andres, this time, presented himself with a music collage – the first five compositions he performed solo, the next two with Howard Fishman (vocals & guitars), and the last two with his old and permanent associate – Raul Terep (drums). This music was recorded live, in the city where Andres resides, it’s Tartu, Estonia.

During the performance of some of the compositions, the crowd of the audience is heard. It gives the impression of a live performance, but it is also a proof that everyone is not exclusively there for music, but… Similar stuff is also in our local clubs, jazz or blues sessions, when part, I would say, of uncultivated audience, spoil the overall impression of everyone of those who are in the club to enjoy the prepared music show. Interesting is the way of how Andres “fights” with that part of the audience. He incorporate in his songs some miniatures from the world’s musical heritage, making it known that the music that needs to be listened to is on the podium.

Compositions number 3, 7 and 8 are traditionally made, composition number 6 is signed by Richard M. Jones, others are signed by Andres Roots. This album has the subtitle “Field recordings” and Andres explains it as follows: “The field recording means it wasn’t produced in studio. The field recordings album, originally released as a limited-edition audio cassette for Record Store Day, is now available on CD.“

Music is devoid of any technical refinement. The music in its primordial form is therefore honest and is listened to with great care. Andres knows how to do it on the best, but also on, the harder way – on one side, is the musician and his instrument, on the other side is an audience, and in the between – the fairy tale music.